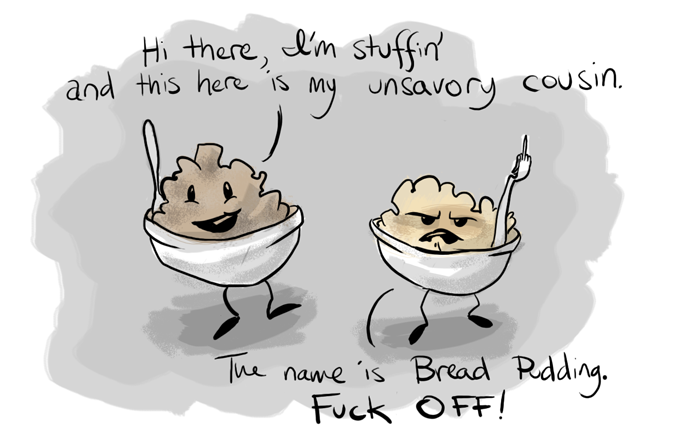 I've run out of Thanksgiving leftovers, it's sad.

My awesome roommates gave me some of their bread pudding the other week. While eating, I was struck with the sudden realization that bread pudding is not that far from stuffing, it just doesn't go as well with Sriracha (aka cock sauce, aka rooster sauce, aka my raison d'etre).

I like imagining the evolution of food. For instance, if your bread gets old and hard, but you still want to use it, you can soak it in egg and milk and some cinnamon, sugar, and nutmeg, then fry it to get french toast (or, in French, "pain perdu", meaning "lost bread"). Say you do this with a pan full of your lost breadcrumbs and put it in the oven, you get bread pudding. It's evolution!

There's no explanation for how ice cream came to be. I'm thinking either intelligent design or aliens are responsible.